Ammo Stilo is a streetwear brand that has been building through the hip-hop community for quite some time now. The brand can be seen on numerous artists, some of the more recent are Lil Nas X, Offset, and Lil Keed. Just last year, Stilo traveled city to city for their pop up shop tour and tattooed the brand’s logo on customers.

With the Clout Bag running rampant, stepping out of those shadows and doing more is the goal. Ammo Stilo now plans to create a visual point of view inspired by the Philadelphia streets.

Monday afternoon the brand revealed their “Targeted” version of the Chuck All-Star 70. This shoe is expected to release in late August 2019.  The sneaker appears to have a custom shoelace with metal tips, text wrapped around the back of the shoe, and their logo embroidered on top. You can check it out below and stay tuned for more on Ammo Stilo. 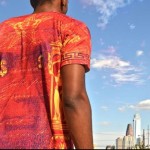