Young Crazy is Virginia’s top rap talent. He and Detroit’s Icewear Vezzo surprisingly link up to release their new video, “Shell Jumping“. Icewear Vezzo is coming off the heels of his “Up The Scoe” video with Chicago rap phenomenon Lil Durk. Since its release, the visual effort has racked up a whopping 3 million YouTube views and has quickly climbed the charts as one of Vezzo’s most successful releases to date. Moreover, the momentum between the two serves as an impressive moment to collaborate. Both have a lot of respect in their hometown. Choosing the local gas station to team up shows that every hood can relate to the other.

“Shell Jumping” arrives ahead of the release of Young Crazy’s forthcoming full-length project, Interstate 110. The visual shows the Virginia lyricist mobbing out with his homies in Detroit with G.T. & featured act Icewear Vezzo. The exciting visual uses the Shell gas station to go toe to toe with their vicious bars. The upcoming 9-track LP offering is slated to drop on May 6 with brand new material that fans previously haven’t heard. It serves as a follow-up to Gin in the Pot, his 2020 collaboration tape with superproducer Pyrex (J. Cole, DaBaby, Young Thug, Offset).  Crazy has been bubbling in Virginia for a long time. This next project is sure to take him to the next level. His partnership with United Masters is looking to be a match made in heaven for the self-made rapper. 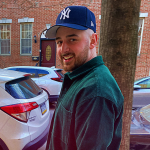 Law might be The Next Lady of music to blow!