The public see’s rarely what’s going on behind the scenes of their favorite song or project. Cam Wallace is now on the list of being just as dope on the mic as he his behind the scenes producing and writing. He is the definition of being the jack of all trades in the music industry. Recently Cam released his Ep “These Perfect Moments,” which includes seven certifiable songs and a feature from Wiz Khalifa. After listening, I was very intrigued to explain what I heard because the production and lyrics were out of this world.

Here is the conversation that I had with the one and only Cam Wallace!

How does it feel to be signed to Motown Records?

It honestly feels excellent because many of the people I look up to have touched Motown Records. Most of the prominent artists back then had to go through Motown first, and for me to be in that lineup now, I feel blessed.

What was the intent of “These Perfect Moments”?

I love albums that feel like they are taking me somewhere. So with these Ep’s, it’s just a way for me to get fire records that I love out. Every song that I did on the project was recorded after a moment going on when I was getting signed.

How did the song “Deez Boys” come about? The instrumentation is insane!

Vincent Macauly is the producer of “Deez Boys”. He is also the producer for the song Throw’d As it Gets. I am a jazzy guy, so when I heard the horns, I was like, yo, this is it, and started writing. I still produce, but it is easier to get beats from others when I am in artist mode. The fun part of this is getting beats from other producers because I know what it’s like being on the other side of the music-making process.

On the song “We Made It” there’s a lyric that says ‘I fell down, but I wasn’t defeated’. What’s the meaning behind that lyric?

I have been making music forever; yo, I am not even going to put a cap on it. I was that kid saying I was going to chase my dreams. So I moved to Atlanta back and forth. The “We Made It” record is like a breath of fresh air, almost like my second win.

How did it feel working on the other side of the music industry including writing and production?

As time went on with me producing and writing for other artists, I started to hoard my records a little bit. But also, when you give a record to an artist who will execute just as good or even better than you could even do, that makes it easier to give that record up. They might do things to the record that you, as the songwriter, couldn’t even do. Now I look at it like everything’s for sale; I make music every single day.

What does the future look like for Cam Wallace?

The features coming out are going to be crazy. I can’t wait for my fans to hear some of the new records I have. Nothing about me is typical. The overall goal of what I see for my career is a grown man with experience and still being tapped in at the same time.

Cam Wallace is a unique gem in the music industry. From the creativity to the multiple disciplines he has mastered in the music business. Talented is an understatement for Cam. There are so many levels and vibes that he can tap into as an artist. He is really on the way to being one of those in-demand rappers if he continues to give the public fire projects like “These Perfect Moments.” 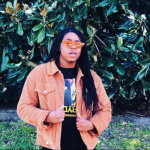